Posted on October 28, 2012 by dogstwentyfourseven

This year in particular I am noticing that more houses are decorated with over-the-top Halloween decorations. As I walk my dogs during the daytime we, both the two- and four-legged, have experienced some pre-Halloween frights! Do you notice your dog getting spooked by Halloween decorations?

I walk two adorable Portuguese Water Dogs named Marley and Jackson. They both belong to the same family and are a delight to walk. Last week while coming around a corner I noticed a GIANT blown up black and orange spider next to a home’s front door. It was about four houses away from us; I was curious to see their reactions.

As we neared the house things became even more of interest as the spider fully inflated to an unbelievable size, lifted his head and turned to look our way! This was too much for Jackson who decided to step off the sidewalk to avoid proximity to this unknown, moving, silent creature. 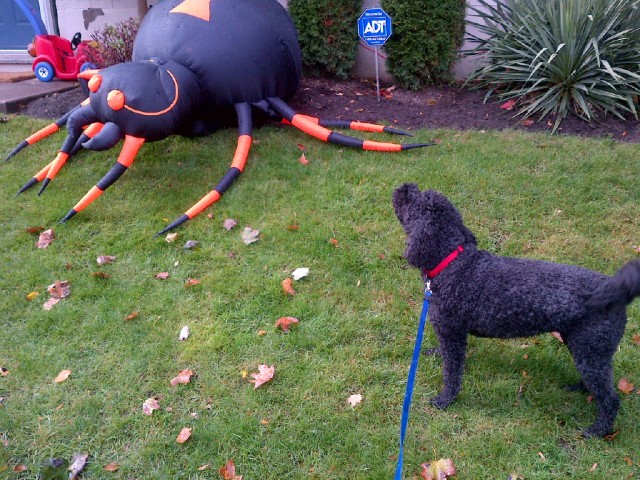 Marley, on the other hand, decided to keep walking on the sidewalk and barely flinched. As we walked by the spider it raised its head again, and she must have seen this out the corner of her eye. I kept my voice light and happy and said “What’s that Marley?” Without missing a beat she slowly walked up to it and proceeded to bark at it, showing who was boss. Jackson kept looking over his shoulder as we walked away. I don’t blame him; the spider looked as if it might have come after us!

I replayed the event to his owner and was told that last year a giant pumpkin with swirling images inside had been very scary for their boy. For weeks after Halloween, Jackson would anticipate this scary pumpkin to still be on their lawn, even after it had been taken down. This goes to show how dogs can hold onto fears for some time after a negative event.

Meanwhile, Sophie, a Dutch Decoy Spaniel who is ten months old, is taking in her first Halloween full speed ahead. She loves to chase birds and squirrels, so seeing decorations resembling animals is quite intriguing for her. Some lawns have pretend scary crows on them or massive rats with menacing teeth peaking from behind stairs or a bush.

One lawn had a frightening bride and groom half buried in the flower bed; this was something that halted Sophie in her tracks. A few houses away, a big blown up cat and a ghost were very menacing to look at from her (a small dog’s) perspective.

Ember, our Labrador, has made me laugh a few times this week. Many homes scatter bones on their front lawns near pretend graves. Ember thinks that this is fantastic and more than once has attempted to pick up these “gifts” left lying out and to bring them with her as we continue on our walk. Only the bone shapes seem familiar and are desirable to her. 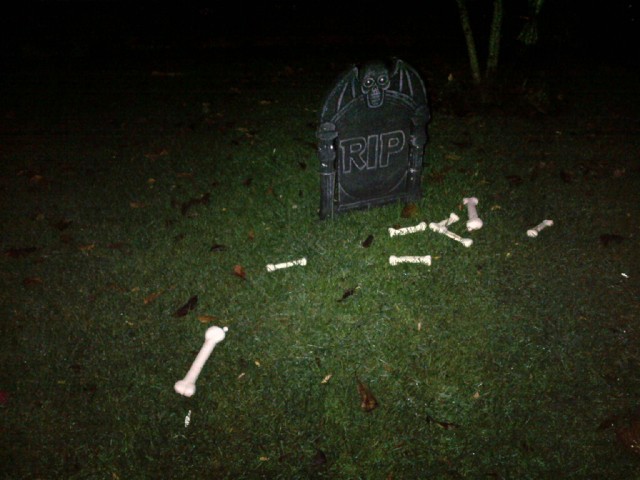 I do not have costumes for our Labradors; it is something that we have only tried once. I once purchased a huge milk bone costume for Abby; I could not resist. It was light, almost like an apron, and it lay across both her sides and did up under her belly. Her coat is the same colour of the beige milk bone treats so I believed it to be a great choice of costume. She hated wearing it; a picture was probably taken and the costume never came out again.

There are countless numbers of sites on the internet of dogs wearing costumes or contests for the best costumes. I found one Canadian site that was quite something to see. Dogs are shown modelling so many types of costumes. The choices are endless: animal, career, superhero, holiday, classic and TV/movie dog costumes.

My personal opinion is not to make your dog feel physically uncomfortable if put into a costume. It is certainly not their choice; we make this decision for them. Observe if your dog looks happy, for example is wagging their tail and/or has a bright-eyed, engaged expression. Their eyes should not be cast downwards. Often dogs can display happiness with their ears too, or their bodily stance.

Make sure the costume does not block their vision in any way or their ability to move around freely. Things should not be tight on the costume or have items on it that might frighten a dog, especially true for a smaller dog e.g. material that flaps suddenly out the corner of their eye.

Have your dog on leash if it is going with you to Trick-or-Treat; the night is exciting and they may suddenly want to chase something they see or cross a road to greet a familiar person. This can be dangerous with traffic.

GlowDoggie collars are LED collars in wonderful colours. They allow your dog to be seen in the darker months ahead and come in lots of sizes. This is a fun way to “dress up” your pooch safely and has a similar “wow factor” that a costume can have.

Will you be putting your dog in a costume to enter a contest or for Halloween?

If you would like to receive my blog posts by email as soon as they are published, click on “Follow” on my main page. You will automatically receive them immediately after publication. Thank you for your support! Becky White

Becky White is a dog walker.She and her husband live in Toronto with their two daughters.Becky has been a dog lover all of her life and feels now is the right time to share her stories, experiences and adventures!
View all posts by dogstwentyfourseven →
This entry was posted in Dog Collar, Dog Eyes and Vision, Dogs and Halloween and tagged dog costumes, dog safety, dogs and Halloween, dogs247, Glowdoggie collars. Bookmark the permalink.

3 Responses to Dogs and Halloween